Slash-and-burn in the rainforest – do sustainable alternatives exist in the Amazon region? 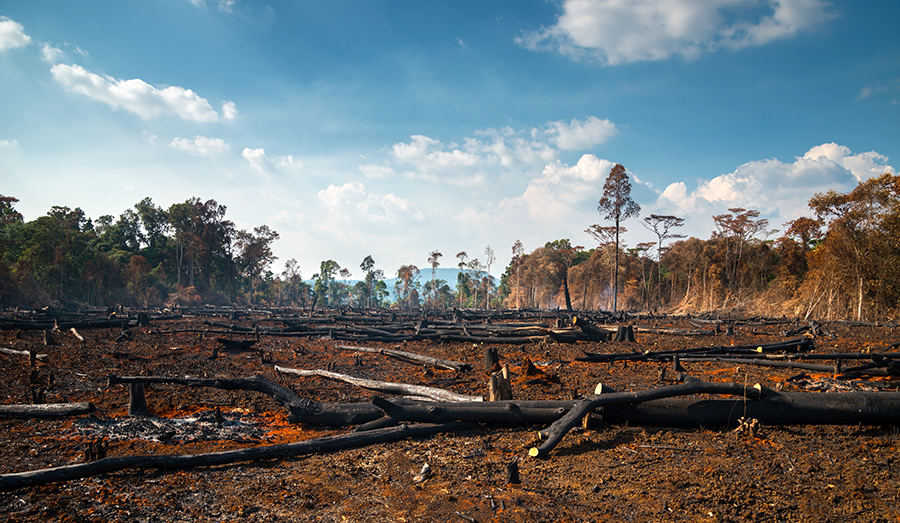 Unparalleled biodiversity and lush vegetation – the Amazon rainforest is home to more species per square kilometer of land than all European countries put together. There are about 450 different tree species on every hectare of forest alone. This vegetative diversity grows in one of the poorest soils in the world; how is this possible? How can we protect the forest and the diversity of species? What alternatives are there to the mass slash-and-burn year after year?

The humus layer in the rainforest is only a few millimeters thick. Here, if it is cleared, nothing can ever grow again

This diversity is made possible by a unique above-ground cycle. Falling plant parts are decomposed in an instant and the nutrients are made available to the roots. The formation of a humus layer is almost impossible. Below the root layer there is only sand and clay. If the soil is cleared for agriculture, the bare soil has no chance. The ash from slash-and-burn makes it fertile for a maximum of three years. After that it is exposed to erosion and lost forever.

Brazil's agriculture is the main driver for fire-clearing

And yet agricultural companies are clearing more forest areas in Brazil than ever before. 80 percent of the clearances are illegal and serve above all to expand land ownership. Four fifths of Brazil's deforestation are due to cattle breeding – not only because of the grazing land, but above all because of the huge soy monocultures, which are indispensable for the conventional meat industry. About 60 percent of soy worldwide is exported from South America.

In fact, there are also opportunities for sustainable soil use in rainforest areas. Slash-and-burn has a long tradition in Brazil, but if the cleared areas have enough time to regenerate, they can function permanently. A prerequisite is the cultivation of mixed crops and a resting period of around 25 years for previously used areas. Subsistence farming is the keyword. Industrial agriculture, which produces almost exclusively for the international market, is certainly not possible in this way.

Terra Preta – Can the black earth of the natives save the tropical forest?

The idea sounds good at first: Terra Preta, the black earth discovered in the tropical rainforest, enriches the soil with nutrients and makes it arable. Science now agrees: this nutrient-rich soil, which has been produced by humans over thousands of years, has enabled the indigenous peoples of the Amazon to live a carefree life. Terra Preta consists of kitchen waste, bones, feces and plant charcoal, which originate from the natural way of life of the indigenous people in certain Amazon regions. The secret of the Terra Preta is its humus content: at over 15 percent, it is far above that of natural arable land at only one to a maximum of four percent.

Does that mean that big farmers should start to live like native people? Even that would hardly be enough to supply the cultivated areas with Terra Preta. A more effective way is to use humic acids, such as those found in high concentrations in Leonardite. Scientific studies have shown that the fertility of the soil is largely determined by its humic acid content. Due to their high cation exchange capacity, their oxygen content and their excellent water retention capacity, humic acids are a valuable tool for improving soil fertility and plant growth. In addition, their use in the field increases the efficiency of fertilizers by up to 30 percent. This means 30 percent less fertilizer with the same yield – or an increase in yield of 30 percent with the same quantity of fertilizer.

Sustainable land use through agroforestry and more efficient cultivation methods

Numerous projects in Brazil educate people about the advantages of agroforestry. This means that large trees remain on the cultivated area, the substructure of the trees being used for planting. The tall trees provide shade for lower fruit trees and coffee plants and supply the soil with important nutrients through falling leaves. Various medicinal plants and herbs thrive under the trees. Each plant only extracts the nutrients it needs from the soil. By regularly changing the location of plants, which are often harvested and replanted, the soil can regenerate sufficiently.

New cultivated plants such as the Acai berry, cocoa and some other plants can also contribute to the protection of the rainforest. Although still relatively new in the country, they already generate 1.8 billion dollars a year on an area of 4,000 square kilometers. With 3.5 billion dollars on an area of 240,000 square kilometers, cattle breeding and soy are comparatively inefficient.

Those who want to counteract the deforestation of the rainforest can also do so outside the Amazon – in everyday life. The purchase of regional products is just one of many ways to use one’s own consumer behavior to help not make things worse. At the same time, it strengthens local farmers. In addition, agroforestry projects and the use of organic soil conditioners containing humic acids can also contribute to maintaining soil fertility and biodiversity in Germany.

Learn more about the use of humic acids to maintain soil fertility.