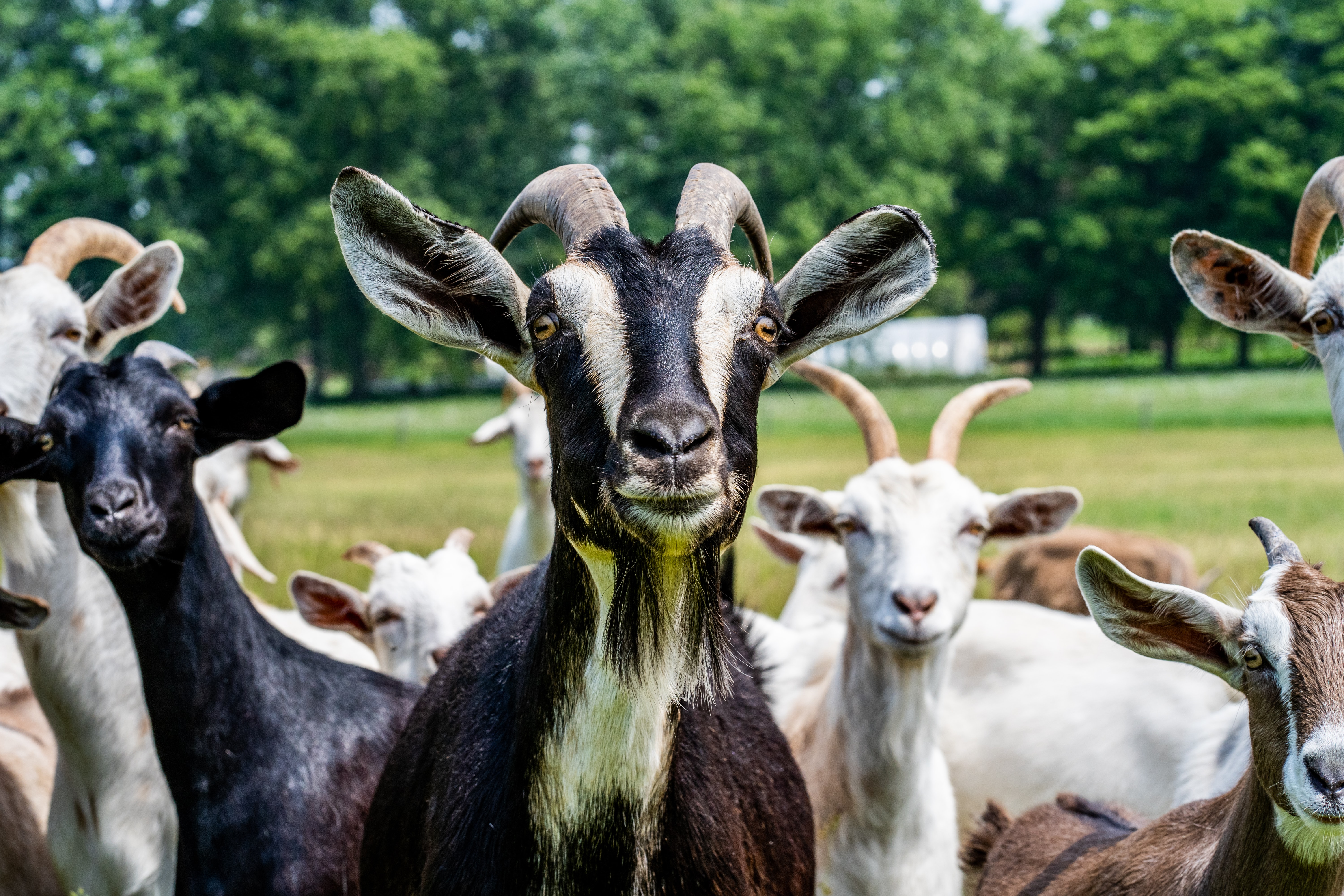 The dairy goat situation in Germany and worldwide

Bone findings from Iran and Iraq prove that goats and sheep were already kept as domestic animals around 10,000 years ago. Thus they belong with the dog to the oldest domestic and farm animals of the world. Goats are adaptable and frugal, providing meat and milk as well as leather and occasionally wool. More than 750 million goats are kept worldwide, in Europe there are about 20 million, mainly in France, Greece and Spain. In Germany, there are about 150,000 goats, almost half of them in Bavaria and Baden-Würtemberg. In Germany, dairy goat husbandry predominates, with the Saanen goat, the Bunte Deutsche Edelziege and the Thüringer Waldziege mostly being bred for this purpose.

A healthy goat is clean, attentive and social. It spends the evening ruminating and excretes well-formed droppings throughout the day.

More difficult to detect is the cause of the sick goat. Diarrhea may be caused by endoparasites such as stomach worms, tapeworms or coccidia. Ectoparasite infestations are accompanied by itching and skin changes, for example in the case of hair lice, fleas or mange mites. Harmful bacteria can cause pseudotuberculosis or listeriosis, and husbandry or feeding errors make goats susceptible to pneumonia or white muscle disease.

Mother Nature's solutions to these problems

These problems are due to an imbalance of health-maintaining factors.

In addition to good barn hygiene (dry litter, clean feed troughs and waterers, good ventilation) and a good supply of micro- and macronutrients, the most important factor is an environment that is as low in stress as possible. Since many pathogens are present virtually everywhere and survive for months and even years, only health prophylaxis in the form of stress resistance and an intact immune system of the goats can be addressed; salutogenesis is the buzzword for this. Diseases such as lip scab, paratuberculosis or clostridial enterotoxemia are particularly prevalent in weakened or stressed animals.

Knowledge of the ancient Romans

Natural feed additives are a dime a dozen. One of the oldest comes from the earth – humic substances. When animals have the opportunity, they ingest them on their own. The success stories, old and new, are many and varied. While pregnant and lactating animals have been fed charcoal since the beginning of the 19th century, today scientific studies prove the effectiveness of humic substances for milk production and health maintenance. By the way, charcoal was first mentioned as a feed additive around 150 BC – Senator Cato the Elder praised the health-promoting influence of charcoal in cattle feeding in his writing de agri cultura.

In dairy goat husbandry, for example, the effect of humic substances is supported by the study “Using humic acid in diets for dairy goats” by Taskin Degirmencioglu for the Department of Feed Technology and Animal Nutrition. In a randomized study with two test groups and a control group, Saanen goats were observed three times for three months during the lactation phase. The test groups received one or three grams of humic acid per kilogram of body weight, while the control group received no humic acid at all. Milk production in the test groups increased significantly, while the composition remained the same. Blood cholesterol levels fell in return – less LDL also means lower susceptibility to disease.

Humic acids are a broad-spectrum antidote to pathogens of all kinds – and are beneficial to the health of the environment, animals and humans. For example, humic acids inhibit the pathogenic growth of molds and bacteria, bind heavy metals, myco- and endotoxins, balance the pH in the gut and promote a healthy microbiome. They form a protective film that reduces susceptibility to pests such as worms and mites.

They can also have a therapeutic effect; additions of aquatic fulvic acids or humic acids can have an anti-inflammatory effect and support the entire metabolism in its functions – the animals become more resistant to heat, wind or rain, they digest better, grow faster and give birth to larger fawns. If they do fall ill, the addition of humic substances can speed up recovery. Humic substances have been used to cure foot-and-mouth disease, and humic acids have also shown selective blocking effects against the following viruses studied: herpes simplex, coxsackie A9, influenza A, rhinovirus 1B, cytomegalovirus, HIV-1 and 2. It is assumed that the humates form complexes with the viruses and therefore cannot be adsorbed.

Microbiome instead of antibiotics

Health grows out of a healthy balance. Humic substances regulate every microbiome towards the optimum – be it the stable climate, the intestinal and skin flora, the balance in the feed or the improvement of drinking water quality. Healthy goats emit less ammonia, nitrogen and methane – which is not only good for the climate, you can also smell it (or not anymore). Humic substances can replace prophylactic antibiotics – that's good for the wallet, the environment and the end consumer. A balanced microbiome also brings calm to the barn: the animals are more relaxed – sometimes more playful – and in any case happier.

Where humic acids come from

Organic matter in soil can be of three states: Living plants and animals, dead plants and animals, and decomposed plants and animals. The latter is referred to as humic matter. Depending on the source material and the duration of decomposition, different humic matter contents and functions result. While fresh compost serves plants as nutrient humus, peat and biochar can also perform their balancing effect. Extracted humic substances from oxidized brown coal, so-called Leonardite, serve as permanent humus and have a very high effectiveness. Therefore, very small amounts are enough to make a significant difference to the health of goats.

Humodor® is suitable for use in the barn. Applied regularly in a clean barn, it reduces odor and the incidence of barn parasites such as flies. A strong microbiome can provide better protection against the development of pathogens than disinfectants. Humedor® also reduces odor emissions of methane, nitrous oxide, hydrogen sulfide and ammonia by 99 %.

Aquatic fulvic acids and powdered humic acids can be added to drinking water and feed.

Do you have any experience with charcoal or even pure humic substances? What are the most common problems or biggest fears in your dairy goat husbandry? We look forward to hearing from you.